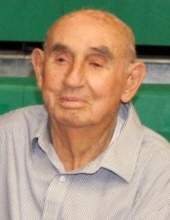 O B I T U A R Y
Mr. William Frank Parson of Greensburg, Kentucky, son of the late Obadiah "Obe" Parson and Lena Beard Parson, was born on Wednesday, August 6, 1924 in Adair County, Kentucky and departed this life on Wednesday, December 26, 2018. He was 94 years, 4 months, and 20 days of age.
He had made a profession of faith in Christ at an early age and was a lifetime and faithful member of the Greensburg United Methodist Church where he served in numerous capacities. He was a WWII Veteran having served in the United States Navy. He entered the service in January 1944 and served as a navel gunner until his discharge in February of 1946 while in Tokyo, Japan. After his military service, he was employed by the U.S. Civil Service at Fort Knox, Kentucky, where he worked as an artillery repairman and retired from there after 30 plus years. He was also a member of the Greensburg Masonic Lodge #54 F&AM.
Mr. Parson is survived by his wife of 69 years, Imogene Paxton Parson of Greensburg, having united in marriage on June 18, 1949.
Other survivors include a daughter and son-in-law: Connie Lynne and Mike Judd of Greensburg; a son and daughter-in-law: William R. "Billy and Liz Parson of Greensburg; two grandchildren: Lindsay Parson Scarborough and her husband, Keith of Auburn, Kentucky, William Andrew Parson and wife, Jade of Greensburg; four great-grandchildren: Tayler Gage Judd of Greensburg, Carly Elizabeth Scarborough, Emma Ruth Scarborough, and Ellie Grace Scarborough all of Auburn; special little buddy: Braylen Chase Thompson of Greensburg; two brothers-in-law and a sister-in-law: Russell Paxton, and Rex and Patsy Kay Paxton of Greensburg; and a host of other relatives and friends.
Mr. Parson was also preceded in death by a grandson: Michael Scott Judd on December 20, 2003; five sisters and three brothers: Madelene Rucker, Pearl Berry, Tina Akin, Tobe Parson, O.D. Parson, Mable Martin, Lillian Murray, and Lawrence Parson.
........................................................
The funeral services for Mr. William Frank Parson will be conducted at 2:00 P.M., Friday, December 28, 2018 at the Greensburg United Methodist Church with burial to follow in the Campbellsville Memorial Gardens. Bro. Dale Curry officiating.
Visitation is requested from 4 P.M. until 8 P.M., Central Time, Thursday at the Cowherd and Parrott Funeral Home, and after 10 A.M., Central Time, Friday at the Greensburg United Methodist Church until time of the funeral service.
There will be a Masonic Rite Service held at 7:00 P.M., Central Time, Thursday evening at the Cowherd and Parrott Funeral Home conducted by the Greensburg Masonic Lodge #54 F&AM.
Memorials are suggested to the Gideon Bible Fund or the Greensburg United Methodist Church building Fund, which can be made at the funeral home or the church.
For online condolences log onto: www.cowherdandparrott.com or Facebook.
PALLBEARERS:
Billy Parson, Mike Judd, Andrew Parson, Keith Scarborough, Randy Colvin, John Frank
HONORARY PALLBEARERS:
Roy Pruitt, Kenny Pruitt, Boyd Collett, Taylor Wright, Michael DeSpain, Ron West,
Robbie Eastham, David Lawhorn, Arzo Miller, Lester Thompson, Ray Hudgins