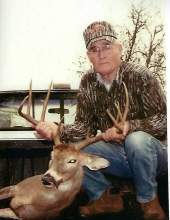 Mr. Vernon Lewis Henderson of Green County, Kentucky, son of the late George Arvin Henderson and Elsie Akin Henderson, was born on Friday, October 16, 1931 in Green County, and departed this life on March 6, 2019 at his residence in Green County, Kentucky. He was 87 years, 4 months, and 21 days of age.
He had made a profession of faith in Christ and was an active member of the Bethlehem Baptist Church. He was a retired auto mechanic having worked at Theiss Chevrolet, Milby Chevrolet and Kessler Garage. He also loved to hunt, fish and do farm work.
Besides his parents, he was preceded in death by his wife, Mary Elois Howard Henderson on February 5, 2019 having united in marriage in July 1959.
He is survived by two brothers and a sister-in-law: Johnny and Doris Henderson and James Henderson all of Greensburg; three sisters and a brother-in-law: Mattie and Billy Gray and Hallie Walebridge, all of Louisville and Catherine Morrison of Greensburg; a special brother-in-law & sister-in-law: Billy Howard and his wife, Gwenn of Greensburg; two special nieces: Julie George of Greensburg and Jennie Rucker of Campbellsville and a host of other relatives and friends.
Mr. Henderson was also preceded in death by three sisters: Dorothy Arnett, Claris Akin and Francis Gray.
.................................
The funeral services for Mr. Vernon Lewis Henderson will be conducted at 10:00 A.M., Central Time, Saturday, March 9, 2019 at the Cowherd and Parrott Funeral Home with burial to follow in the Green County Memory Gardens. Bro. Clifton Sullivan will be officiating.
Visitation is requested from 4 P.M. until 8 P.M., Central Time, Friday at the Cowherd and Parrott Funeral Home and after 7 A.M., Saturday until time of the funeral service.
For online condolences log onto: www.cowherdandaparrott.com or Facebook.