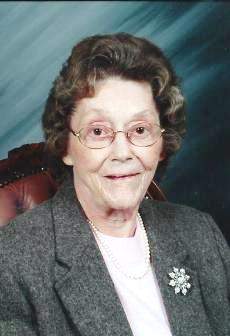 Mrs. Thracy Davis Hall of Shepherdsville, Kentucky, native of Green County, daughter of the late David J. Davis, and Ida Henry Milby Davis, was born on September 9, 1920 in Green County, Kentucky, and departed this life on Sunday, March 15, 2015 at the Green Meadows Healthcare Facility in Mt. Washington, Kentucky. She was 94 years, six months, and six days of age.

She had made a profession of faith in Christ and was a member of the Hodges Chapel United Methodist Church. She was a former Inspector for Fruit of the Loom, Inc. having worked there 18 years.

Survivors include a son and daughter-in-law: Dennis, Jr. and Carrie Hall of Shepherdsville; two granddaughters: Tamara Cantrell and her husband Jerry of Shepherdsville, and Deborah Hall of Louisville; two great-grandchildren: Samantha Cantrell, and Lauren Sharp; a great-great-grandchild: Riley Brook Hilbert; a brother and sister-in-law: D.J. and Sue Davis of Greensburg; and a host of other relatives and friends.

The funeral services for Mrs. Thracy Davis Hall will be conducted at 2:00 P.M., Wednesday, March 18, 2015 at the Cowherd and Parrott Funeral Home with burial to follow in the Green County Memory Gardens. Bro. Kevin Brantley will be officiating.

Visitation is requested after 10:00 A.M., Wednesday at the Cowherd and Parrott Funeral Home until time of the funeral service.