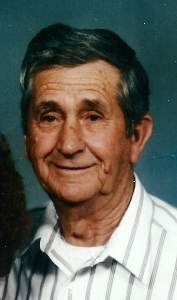 Mr. Stanley Palmer York of Greensburg, Kentucky, son of the late Pearlie York and Dona York, was born on April 16, 1921 in Bath County, Kentucky and departed this life on Friday, August 17, 2012 at his home in Greensburg. He was 91 years, four months and one day of age.

He had a profession of faith in Christ and was a member of the Immanuel Ministries in LeGrande. He was a self employed carpenter, and a Veteran of WWII having served in the United States Army.

He is survived by his wife of 64 years, Geraldine Norris York, having united in marriage on October 15, 1947.

Other survivors include his children and their spouses: Judy Gail and Bill Rickman of Florida, Vickie Lynn Blakeman, Gary Edwin York, Gerald Palmer and Martha York, Mary Etta and Herb Susenbach, Patricia Ann and Kash Hill all of Greensburg, Debbie Carol and Ted Reich, and Ray Gene York all of Florida, and Janet Gaynell and Ronnie Jeffries of Greensburg; 19 grandchildren; 19 great-grandchildren; a brother: Dean York of Florida and a host of other relatives and friends.

The funeral services for Mr. Stanley Palmer York will be conducted at 10:00 A.M., Wednesday, August 22, 2012 at the Cowherd and Parrott Funeral Home with burial to follow in the Green County Memory Gardens with full military honors. Bro. Phillip Trent and Bro. Paul Cooper will be officiating.

Visitation is requested from 4 until 8 P.M., Tuesday at the Cowherd and Parrott Funeral Home and after 7 A.M., Wednesday until time of the funeral service.