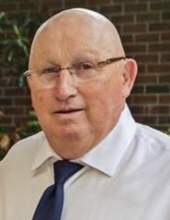 Arlon Stanley Simpson of Campbellsville, Kentucky, son of the late James Ogden Simpson and Margaret Wooldridge Simpson, was born on Wednesday, November 15, 1933 in Green County and departed this life on Sunday, April 3, 2022 at the University of Louisville Hospital. He was 88 years, 4 months, and 19 days of age.
He had made a profession of faith in Christ, and was a member of the Beech Grove Baptist Church where he was a Deacon. He was a lifelong farmer, was a member of the Greensburg Masonic Lodge #54 F&AM, and formerly sang with the “Gospel Fives” gospel group. Mr. Simpson loved to fish, squirrel hunt, and had a talent of storytelling.
He was also preceded in death on August 23, 1996 by his first wife: Barbara Ann Burris Simpson. He later united in marriage to Lucretia Mae Miller Simpson of Campbellsville, having united in marriage on June 20, 1998 who survives.
Other survivors include two daughters and sons-in-law: Deborah and Michael Matney of Franklin, Tennessee, and Paulette and Jimmy Lobb of Edmonton; bonus children: Mike and Marie Wright of Campbellsville, Vickie Harrison of Elizabethtown, Mary Ann and Robbie Wise of Campbellsville, Mark and Kara Wright of Summersville, Gail and Ricky Underwood of Campbellsville; a daughter-in-law: Tina Wright of Lebanon;15 grandchildren; 17 great-grandchildren; 5 great-great grandchildren; a brother and sister-in-law: Boyce and Judy Simpson of Greensburg; two sisters and a brother-in-law: Joyce and Leroy Patterson, and Bernice Janes all of Greensburg; brothers-in-law and sisters-in-law: David and Jackie Miller, Donna Miller, Lloyd and MaryAnne Miller, Bob and Barb Miller, Rose Anne and Larry Albright, Linda and Ben McCaulley all of Pennsylvania, and Arthur Miller of Virginia; and a host of other relatives and friends.
Mr. Simpson was also preceded in death by a son and a bonus son: James Willie Simpson, and Jeff Wright; two grandchildren: Benjamin Christie Matney and Jay Wright; and a brother: Dennis Simpson.
…………………………
The funeral services for Stanley Simpson will be conducted at 12:00 Noon, Central Time, Wednesday, April 6, 2022 at the Cowherd and Parrott Funeral Home with burial to follow in the Green County Memory Gardens. Bro. Paul Dicken and Bro. Tim Roberts officiating.
Visitation is requested after 9:30 A.M., Central Time, Wednesday at the Cowherd and Parrott Funeral Home until time of the funeral services.
The family has asked that expressions of sympathy take the form of donations to the Gideon Bible Fund, which can be made at the funeral home.