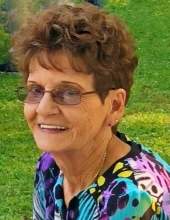 Mrs. Sharon Pierce Davis of Greensburg, Kentucky, daughter of the late Delbert Pierce and Naomi Oaks Pierce, was born on Sunday, July 30, 1944 in Green County and departed this life on Tuesday, October 29, 2019 at her home. She was 75 years, 2 months, and 29 days of age.
She had made a profession of faith in Christ and was a member of the Bethlehem Baptist Church. She was also a retired machine operator for Fruit of the Loom, Inc.
She united in marriage to Daryl Lynn Davis on April 14, 1967 who preceded her in death on May 24, 2007.
Survivors include a son: Mike Pickett of Greensburg; two daughters and a son-in-law: Monica Davis Abner, and Erika Davis Hays and Anthony Hays all of Greensburg; three grandchildren: Dalton Pickett of North Carolina, Delona Hays, and Mattie Abner both of Greensburg; a sister: Pearldean Jeffries of Greensburg; two brothers and sisters-in-law: Lannie and Gail Pierce of Greensburg, and Daryl and Julie Pierce of Shepherdsville; and a host of other relatives and friends.
Mrs. Davis was also preceded in death by a grandchild: Van Austin Horton on January 30, 2004.
.........................................................
The funeral services for Mrs. Sharon Pierce Davis will be conducted at 10:00 A.M., Central Time, Saturday, November 2, 2019 at the Cowherd and Parrott Funeral Home with burial to follow in the Green County Memory Gardens in Summersville. Bro. Cole Caven officiating.
Visitation is requested from 4 P.M. until 8 P.M., Central Time, Friday at the Cowherd and Parrott Funeral Home and after 7 A.M., Saturday until time of the funeral service.
The family has asked that expressions of sympathy take the form of donations to Hosparus of Green River or the Gideon Bible Fund which can be made at the funeral home.
For online condolences log onto: www.cowherdandparrott.com or Facebook.
PALLBEARERS:
Anthony Hays, Chris Ingram, Dalton Pickett,
Chris Moss, Danny Harrison, Corey Hancock
HONORARY PALLBEARERS:
Lannie Pierce, Mike Pickett, Glen Judd, Randy Young, Vernon White, Daryl Pierce, Brian Pierce