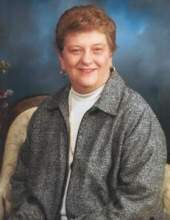 Sandra Lea Hads Warren of Summersville, Kentucky, daughter of the late Dean C. Hads and Irene Schrad Hads, was born on Saturday, December 21, 1940 in Maquoketa, Iowa. They moved to Abilene, Texas so her father could further his career as a livestock auctioneer. She departed this life on Saturday, August 29, 2020 at her home. She was 79 years, 8 months, and 8 days of age.
She had made a profession of faith in Christ and was a member of the Summersville Baptist Church. Her greatest accomplishments were being a homemaker and a mother. She was known for her sewing skills and being active with her children's school activities.
Survived by her husband of 62 years, William Lewis Warren, Airman 2C of Summersville, having united in marriage on June 27, 1958 at the Dyess Air Force Base in Abilene, Texas. After his discharge from the military, they relocated to Green County, Kentucky.
Other survivors include a son and daughter-in-law: Dean and Ruth Warren of Summersville; two daughters and a son-in-law: Barbie and Eddie Milby of Summersville, and Savonna Warren of California; two grandchildren: Ashley Ree Milby, and Jared Milby both of Summersville; four bonus grandchildren: Josh Strain of Tennessee, Ashley Bowles of Summersville, Sydnie Fields of Greensburg, and Stan White of Summersville; seven bonus great-grandchildren; and a host of other relatives and friends.
.........................................
There will be graveside services for Sandra Lea Hads Warren held at 3:00 P.M., Central Time, Monday, August 31, 2020 at the Green County Memory Gardens. Bro. Lee Warf officiating.
The family has asked that expressions of sympathy take the form of donations to Hosparus of Green River, which can be made at the funeral home.
For online condolences log onto: www.cowherdandparrott.com or Facebook.
PALLBEARERS:
Dean Warren, Eddie Milby, Jared Milby, Jerry Warren,
Shelby Warren, Donnie McCubbin