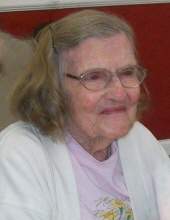 Prudence Milby Russell of Buffalo, Kentucky, daughter of the late Frank Milby and Ann Sarah Hamilton Milby, was born on Tuesday, October 19, 1920 in Green County and departed this life on Wednesday, December 4, 2019 at the Sunrise Manor Care Home in Hodgenville. She was 99 years, one month, and 16 days of age.
She had made a profession of faith in Christ, was a member of the Wesley Meadows United Methodist Church in Larue County and was a homemaker.
She united in marriage to Ned Russell on October 19, 1946 who preceded her in death on March 1, 2013.
Survivors include several nieces, nephews, other relatives and friends.
Mrs. Russell was also preceded in death by a brother: Syrus H. Milby; and two sisters: Sybil Russell and Fay Graham.
........................................................
The funeral services for Prudence Milby Russell will be conducted at 10:00 A.M., Central Time, Saturday, December 7, 2019 at the Cowherd and Parrott Funeral Home with burial to follow in the Green County Memory Gardens. Bro. Andrew Singh and Bro. Wallace Votaw officiating.
Visitation is requested from 4 P.M. until 8 P.M., Central Time, Friday at the Cowherd and Parrott Funeral Home and after 7 A.M., Saturday until time of the funeral service.
The family has asked that expressions of sympathy take the form of donations to the Gideon Bible Fund, or the Hamilton Cemetery Fund, which can be made at the funeral home.
For online condolences log onto: www.cowherdandparrott.com or Facebook.
PALLBEARERS:
Jim Russell, Barry Russell, Joe Milby,
Ben Graham, Jamie Price, Robbin Redmon