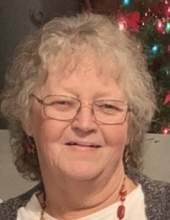 Phyllis Jean Parrott Penick of Greensburg, daughter of the late Jess M. Parrott and Hazel Bernice Abney Parrott, was born on Thursday, August 14, 1947 in Lebanon, Kentucky and departed this life on Friday, July 31, 2020 at the Jewish Hospital in Louisville, Kentucky. She was 72 years, 11 months and 17 days of age.
She had made a profession of faith in Christ and attended the Greensburg Church of the Nazarene. She worked as a seamstress and was a former employee of Fruit of the Loom, Inc., Jan Mar and Topps Safety Apparel.
She is survived by her husband of 56 years, Larry Thomas Penick of Greensburg having united in marriage on July 9, 1964.
Other survivors include: three sons and a daughters-in-law; Kent and Kim Penick of Campbellsville, Brian and Marcia Penick of Greensburg and Joe and Chasity Penick of Campbellsville; two daughters and a son-in-law: Cheryl and Jon Montgomery of Greensburg and Lori Davis of Greensburg; 15 grandchildren; 19 great-grandchildren; three sisters and brothers-in-law: Vickie and Greg Robertson of Florida, Judy and Charles Nalley of Lebanon and Paula and Terry Clark of Rineyville; brothers-in-law and sisters-in-law: Doug and Janie Penick of Campbellsville, Dennis and Brenda Penick of Summersville, Rex and Terri Penick of Maryland, Selena Marcum, and Ramona Penick both of Greensburg.
........................................
The funeral services for Mrs. Phyllis Jean Parrott Penick will be conducted at 10:00 AM Monday, August 3, 2020 at the Cowherd & Parrott Funeral Home with burial to follow in the Green County Memory Gardens. Bro. Jared Henry, Bro. David Young and Bro. Dennis Penick officiating.
Visitation is requested from 4 PM until 8 PM, Central Time, Sunday at the Cowherd and Parrott Funeral Home and after 7 AM Monday until time of the funeral service.
The family has asked that expressions of sympathy take the form of donations to the Gideon Bible Fund which can be made at the funeral home.
For online condolences log onto: www.cowherdandparrott.com or Facebook.
PALLBEARERS:
Jared Penick, Blake Penick, Dylan Penick,
Wyatt Montgomery, Tyler Davis, Jace Penick, Hayli Osborne, Krystal Cain, & Chloe Montgomery
HONORARY PALLBEARERS:
Sunday School Class, remaining grandchildren, & remaining great-grandchildren