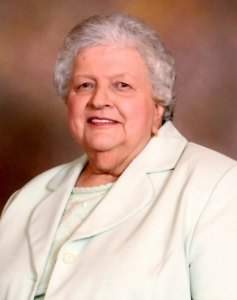 Mrs. Nancy D. Milby of Greensburg, Kentucky, daughter of the late James E. Durrett and Mary Katherine Chandler Durrett, was born on August 27, 1933 in Taylor County, Kentucky, and departed this life on Thursday, June 7, 2012 at the Norton's Hospital in Louisville, Kentucky. She was 78 years, 9 months and 11 days of age.

The funeral services for Mrs. Nancy D. Milby will be conducted at 1:00 P.M., Sunday, June 10, 2012 at the Cowherd and Parrott Funeral Home with burial to follow in the Green County Memory Gardens. Bro. Kevin Brantley and Bro. Joe Jones will be officiating.

Visitation is requested from 4 until 8 P.M., Saturday at the Cowherd and Parrott Funeral Home and after 7 A.M., Sunday until time of the funeral service.

Memorials are suggested to the Greensburg Cumberland Presbyterian Crossroads Program, which can be made at the funeral home.