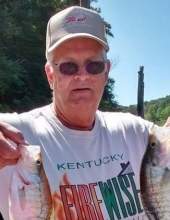 O B I T U A R Y
Morris Edward Milby of Summersville, Kentucky, the son of Hugh Roosevelt Milby and Ruth Elizabeth Milby, was born on Tuesday, October 28, 1947 in Green County, Kentucky and departed this life on Monday, February 12, 2018 at his home. He was 70 years, 3 months, and 15 days of age.
He had made a profession of faith in Christ and was a member of the Aetna Grove Baptist Church. He was a farmer, a member and past board member for the Summersville Volunteer Fire Department having served 28 years as Unit #99 Fire Fighter, he loved to fish and work in his garden.
Survived by his wife of 50 years, Mary Russell Milby of Summersville, having united in marriage on March 25, 1967.
Other survivors include three sons and a daughter-in-law: Eddie Wood and Barbie Milby of Summersville, Chad O'Brian Milby and his fiancé, Emily Worful of Elizabethtown, and Stephen H. Milby of California; a daughter: Lea Ann Milby of Summersville; 13 grandchildren; four great-grandchildren; a brother and sister-in-law: Carlos Lee and Judy Milby of Summersville; two sisters and a brother-in-law: Mazie Lucado of Taylorsville, and Henrietta and Ed Burkhardt of Louisville; and a host of other relatives and friends.
Mr. Milby was also preceded in death by a son: Hughie Dale Milby on August 1, 1996; a brother and three sisters: Danny Hugh Milby, Illa Dean Lobb, Margie Price, and Mary Jo Milby.
.........................................
The funeral services for Morris Edward Milby will be conducted at 10:00 A.M., Central Time, Thursday, February 15, 2018 at the Cowherd and Parrott Funeral Home with burial to follow in the Green County Memory Gardens. Bro. Kelvin Edwards and Bro. William C. Milby, Jr. officiating.
Visitation is requested from 3 P.M. until 8 P.M., Wednesday at the Cowherd and Parrott Funeral Home and after 7 A.M., Thursday until time of the funeral service.
Memorials are suggested to the Gideon Bible Fund or Hosparus of Green River, which can be made at the funeral home.
For online condolences log onto: www.cowherdandparrott.com or Facebook.
PALLBEARERS:
Buddy Milby, Brent Milby, Jared Milby, Ryan Milby, Chris Russell,
Jason Russell, Jordan Milby, H.W. Marr.
HONORARY PALLBEARERS:
Abbi Milby, Asa Milby, Emily Bradford, Megan Milby, Hayden Smith, Shelby Milby, Maylee Hicks, Ashley Milby, Preston Milby, Mazie Milby, Carson Milby, Ava Milby, Allan Milby, Chris Milby.