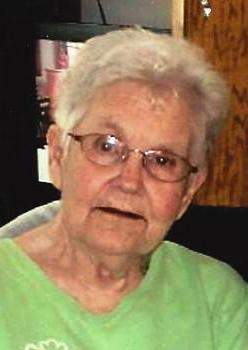 Mildred Corine Underwood Vaughn of Greensburg, Kentucky, daughter of the late Dellie Underwood and Florence Nelson Underwood, was born on October 18, 1931 in Larue County, Kentucky, and departed this life on Friday, May 23, 2014 at the Golden Living Center-Green Hill. She was 82 years, seven months, and five days of age.

She had made a profession of faith in Christ and was a member of the Liberty Missionary Baptist Church. She was a retired employee for Fruit of the Loom, Inc. having worked as a machine operator-hem bottom for 18 years.

Survivors include two sons and daughters-in-law: Gary W. and Doris Vaughn, and Berry and Carol Vaughn all of Summersville; two daughters and sons-in-law: Debbie and Wendell Clark, and Pricillia and Kenneth Skaggs all of Greensburg; five grandchildren: Allen Skaggs, Nathan Clark, Brooklyn Franklin, Jason Vaughn, and Jeremy Vaughn; six great-grandchildren; two step great-grandchildren; a sister-in-law: Helen Underwood of Elizabethtown; and a host of other relatives and friends.

The funeral services for Mildred Corine Underwood Vaughn will be conducted at 10:00 A.M., Tuesday, May 27, 2014 at the Cowherd and Parrott Funeral Home with burial to follow in the Green County Memory Gardens in Summersville. Bro. Irvin Milby, Jr. will be officiating.

Visitation is requested from 4 until 8 P.M., Monday at the Cowherd and Parrott Funeral Home and after 7 A.M., Tuesday until time of the funeral service.