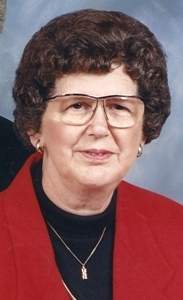 Mrs. Marilyn Jean Bonta Simpson of Greensburg, Kentucky, daughter of the late William Clarence Bonta and Stella Pauline Wright Bonta, was born on September 6, 1935 in Green County, Kentucky, and departed this life on Tuesday, December 11, 2012 at the Taylor Regional Hospital in Campbellsville. She was 77 years, three months, and five days of age.

She had made a profession of faith in Christ and was a member of the Mt. Lebanon United Methodist Church. She was a former employee for Fruit of the Loom, Inc. having worked 38 ½ years, and was a homemaker.

She is survived by her husband of 58 years, Homer Bloyd Simpson having united in marriage on August 28, 1954.

Other survivors include a granddaughter: Shawna Lynn Russellburg of Waynesburg; a grandson and his wife: Shane Lee and Kasey Lovins of Indiana; a great-grandchild: Jazlynn Propes of Waynesburg; three brothers and sisters-in-law: Winfred and Dorothy Bonta, Bill and Alicia Bonta, and Wilburn and Connie Bonta all of Green County; two sisters and brothers-in-law: Joyce and Billy Simpson, and Suvada and Bobby Arnett all of Green County; and a host of nieces, nephews, other relatives and friends.

Mrs. Simpson was also preceded in death by her son: Danny Walton Simpson.

The funeral services for Mrs. Marilyn Bonta Simpson will be conducted at 11:00 A.M., Thursday, December 13, 2012 at the Cowherd and Parrott Funeral Home with burial to follow in the Green County Memory Gardens. Joseph Wilcoxson, Bro. Jonathan Meadows, and Bro. Troy Arnett will be officiating.

Visitation is requested from 4 until 8 P.M., Wednesday at the Cowherd and Parrott Funeral Home and after 7 A.M., Thursday until time of the funeral service.

Memorials are suggested to the Gideon Bible Fund, or the Mt. Lebanon United Methodist Church, which can be made at the funeral home.