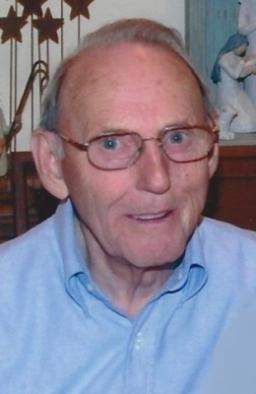 Mr. Leon Lewis, Sr. of Summersville, Kentucky, son of the late Holman Lewis and Pauline Vaughn Lewis, was born on September 13, 1931 in Green County, Kentucky, and departed this life on Sunday, January 24, 2016 at his home. He was 84 years, 4 months, and 11 days of age.

He had made a profession of faith in Christ and attended the Greensburg Church of the Nazarene. He was Owner and Operator of the Lewis Grocery in Summersville. Was a veteran of the Korean War having served in the United States Air Force from 1951 until 1955. He was a member of the American Legion Rod Lowe Post #124, past Green County School Board Chairman and member for 20 years, and coached and was active in the little league program for several years.

Survivors include two sons and daughters-in-law: Leon Jr. and Ann Lewis of Columbia, and Steve and Tracy Lewis of Summersville; a daughter and son-in-law: Sonya and Johnny Orberson of Campbellsville; five grandchildren: Chris Lewis, LeAnna Lewis both of Columbia, Ann-Michael Tucker and her husband Jordan of Summersville, Becca Orberson, and John Lewis Orberson both of Campbellsville; a great-grandchild: Caleb Tucker of Summersville; brothers-in-law and sisters-in-law: Bobby Milby of Florida, Janice Purcell-Basu and Joy Basu of Louisville, and Billy and Linda Riddle of Somerset; an uncle: Pete Vaughn of Summersville; nieces and nephews: Sasha Brown of Louisville, and Scott and Dana Couch of Tennessee, Robert Milby and Debra Milby both of Florida; and a host of great-nieces, great-nephews, other relatives and friends.

Mr. Lewis was also preceded in death by a sister: Rose Vaughn Milby.

The funeral services for Mr. Leon Lewis, Sr. will be conducted at 11:00 A.M., Thursday, January 28, 2016 at the Greensburg Church of the Nazarene with burial to follow in the Green County Memory Gardens. Bro. Richard Morgan, Bro. Jeff Eaton, Steve Caven, Larry Smith and Chris Lewis officiating.

Visitation is requested from 4 P.M. until 8 P.M., Wednesday at the Greensburg Church of the Nazarene and after 7 A.M., Thursday at the church until time of the funeral service.