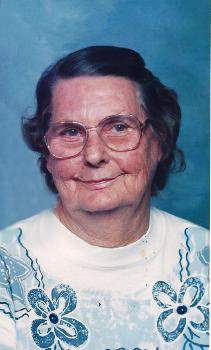 Mrs. Lela Milby Bradshaw of Summersville, Kentucky, daughter of the late George Robert Milby and Linda Jane Morgan Milby, was born on September 10, 1935 in Green County, Kentucky, and departed this life on Friday, June 7, 2013 at the Jane Todd Crawford Hospital. She was 77 years, eight months, and 28 days of age.

She united in marriage to William Arthur Bradshaw on December 28, 1957 who preceded her in death on December 21, 2006.

The funeral services for Mrs. Lela Milby Bradshaw will be conducted at 11:00 A.M., Monday, June 10, 2013 at the Cowherd and Parrott Funeral Home with burial to follow in the Green County Memory Gardens. Bro. Robert Knight will be officiating.

Visitation is requested from 4 until 8 P.M., Sunday at the Cowherd and Parrott Funeral Home and after 7 A.M., Monday until time of the funeral service.