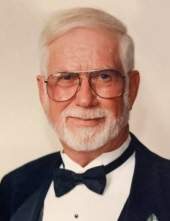 Kenneth Elmer Bloyd of East Prairie, Missouri, son of the late Elmer Walton Bloyd and Elizabeth Lillian Warren Bloyd, was born on Friday, May 1, 1931 in the town of Mac, Taylor County, Kentucky, and departed this life on Wednesday, June 9, 2021 in East Prairie, Missouri. He was 90 years, one month, and eight days of age.
He was a man of great faith and a man of immense heart and love for others. He loved his family beyond all and that love was reciprocated by his family. A beekeeper for over 50 years, he and his wife, Gaye Anne, built a significant and loyal customer base. He was highly respected by all who knew him. He was ordained a minister at Mt. Moriah Baptist Church in Mt. Sherman, Kentucky on April 18, 1965.
Survived by his wife of 22 years, Gay Ann Leadicker Bloyd of Missouri, having united in marriage on May 29, 1999.
Other survivors include four daughters and three sons-in-law: Kimberly Dean and Lawrence Smith of Elizabethtown, Kentucky, Deborah Kay Bloyd-Howard and Robin Howard of Swanton, Ohio, Kathy Lynn Bloyd of Clearwater, FL, and Kristy Michelle and Ron Bull of St. Charles, Missouri; a son and daughter-in-law: Kent Warren and Karen Bloyd of New Albany, Indiana; 11 grandchildren: Matthew Smith, Eric Smith, Joshua Bloyd, Kasey Cossitt, Mindy Robinson, Lillian Bull, Hannah Bloyd, Jack Bull, Jacob Bloyd, Carter Bloyd, and Caroline Bull; four great-grandchildren: Carlee Smith, Samuel Smith, Silas Bloyd, and Avery Bloyd; two half-sisters: Nadeen Brawner of Louisville, Kentucky, and Cynthia Jenkins of Bagdad, Kentucky; and a host of other relatives and friends.
His first wife, Willow, lives in Elizabethtown, Kentucky. They were married for 40 years and share five wonderful children.
……………………………..
The funeral services for Kenneth Elmer Bloyd will be conducted at 12:00 Noon, Central Time, Saturday, June 12, 2021 at the Cowherd and Parrott Funeral Home with burial to follow in the Green County Memory Gardens in Summersville, Kentucky. Joshua Bloyd officiating.
Visitation is requested after 10 A.M., Central Time, Saturday at the Cowherd and Parrott Funeral Home until time of the funeral service.
For online condolences log onto: www.cowherdandparrott.com or Facebook.
PALLBEARERS:
Matt Smith, Eric Smith, Jack Bull,
Jacob Bloyd, Carter Bloyd, Aaron Cossitt