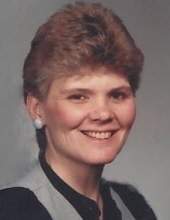 Mrs. JoAnna Bagby McCubbins of Greensburg, Kentucky, daughter of the late James Bagby and Bernadean Nunn Bagby, was born on Thursday, August 27, 1953 in Green County and departed this life on Thursday, August 31, 2017 at the Green Hill Manor Nursing and Rehab Center in Greensburg. He was 64 years, and 4 days of age.
She had made a profession of faith in Christ, was a member of the South Summersville Baptist Church and was a homemaker.
She united in marriage to Garry McCubbins on July 9, 1971 who preceded her in death on May 19, 2014.
Survivors include a son and daughter-in-law: Troy and Julie McCubbins of Greensburg; two grandchildren: Cody McCubbins and Kiley McCubbins both of Greensburg; two brothers and a sister-in-law: Jackie and Glenda Bagby of Greensburg, and Jimmy Bagby of Louisville; a sister-in-law: Gloria Davis of Indiana; and a host of other relatives and friends.
.........................................
The funeral services for Mrs. JoAnna Bagby McCubbins will be conducted at 1:00 P.M., Sunday, September 3, 2017 at the Cowherd and Parrott Funeral Home with burial to follow in the Green County Memory Gardens. Bro. Jerry Noe and Bro. Todd Davis officiating.
Visitation is requested from 4 P.M. until 8 P.M., Saturday at the Cowherd and Parrott Funeral Home and after 7 A.M., Sunday until time of the funeral service.
The family has asked that expressions of sympathy take the form of donations to Hosparus of Green River or the Gideon Bible Fund, which can be made at the funeral home.
For online condolences log onto: www.cowherdandparrott.com or Facebook.
PALLBEARERS:
Cody McCubbins, John Tyler Bagby, Byron Bagby, Sammy Davis,
Mark Chaudoin, Jerry Bagby, Richard Coffey, Clint Walker