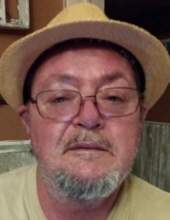 Jeffrey Charles Scott of Greensburg, Kentucky, son of the late Charles Thomas Scott and Annette Scott, was born on Thursday, August 3, 1961 in Louisville, Kentucky and departed this life on Saturday, August 14, 2021 at the University of Cincinnati Hospital. He was 60 years, and 11 days of age.
He had made a profession of faith in Christ, was a member of the South Summersville Baptist Church, and attended the Least the Last the Lost Ministry Church. He was also a welder for Kentucky Trailer.
Survived by his wife of 19 years, Vickie Lynn Cox Scott of Greensburg, having united in marriage on December 1, 2001.
Other survivors include a son and daughter-in-law: Jeffrey Charles Scott, Jr. and Kallie Scott of Campbellsville; a daughter and son-in-law: Ellen Cox Riley and David Riley of Greensburg; four grandchildren: Isaac Scott, Anna Scott both of Campbellsville, Jennifer Riley, and Sarah Riley both of Greensburg; two great-grandchildren: Jaden Riley and Ava Hunter; two sisters and a brother-in-law: Teresa Mcharque of Louisville, and Beverly and Mickey McGuire of Greensburg; and a host of other relatives and friends.
…………………………………
The funeral services for Jeffrey Charles Scott will be conducted at 10:00 A.M., Central Time, Wednesday, August 18, 2021 at the Cowherd and Parrott Funeral Home with burial to follow in the Green County Memory Gardens in Summersville. Bro. Roger Scott, Bro. Jimmy Engle, and Bro. Leslie Jewell officiating.
Visitation is requested from 4 P.M. until 8 P.M., Central Time, Tuesday at the Cowherd and Parrott Funeral Home and after 7 A.M., Wednesday until time of the funeral service.
The family has asked that expressions of sympathy take the form of donations to the Gideon Bible Fund, which can be made at the funeral home.
For online condolences log onto: www.cowherdandparrott.com or Facebook.
PALLBEARERS:
Jeffrey Scott, Jr., Nathaniel Vanarsdall, Josh Scott, Eddie Judd,
Frank Brown, Keith Dobson, Josh Corbin, Shannon Helton,
HONORARY PALLBEARERS:
Jaden Riley, William England, David Riley, Ryan Engle