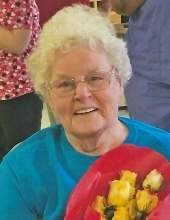 Mrs. Iva Louise Dobson of Greensburg, Kentucky, daughter of late Lillian Morgan Milby and Homer R. Milby was born on July 8, 1929 in Green County and departed this life on February 27, 2019 at the Green Hill Nursing and Rehab Center in Greensburg. She was 89 years, 7 months, and 19 days of age.
She had made a profession of faith in Christ and attended the Oak Forest Cumberland Presbyterian Church. She was a retired inspector for Fruit of the Loom.
She was preceded in death by her husband of 46 years, Charles Leo Dobson on January 22, 2000 having united in marriage on July 27, 1953.
She is survived by three brothers and sisters-in-law and one sister and brother-in-law: Edward Toad and Jean Milby of Gabe, William Lee and Geraldine Milby of Greensburg, Donald Wayne and Ila Gay Milby of Campbellsville, and Patsy and David Moran of Sand Lick; and a host of nieces, nephews and other relatives and friends.
Mrs. Dobson was also preceded in death by a sister and three brothers: Marie Milby Mitchell, Leonard Milby, Arey Milby and Harold Milby.