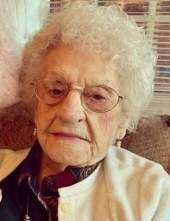 Mrs. Gladys Pepper Milby of Greensburg, Kentucky, daughter of the late John Pepper and Mary Susan Whitlow Pepper, was born on Friday, March 7, 1924 in Hart County, Kentucky and departed this life on Sunday, December 23, 2018 at the Norton Brownsboro Hospital in Louisville. She was 94 years, 9 months, and 16 days of age.
She had made a profession of faith in Christ, was a member of the Sand Lick Separate Baptist Church and was a homemaker.
She united in marriage to Kenneth Leslie Milby on January 25, 1947 who preceded her in death on July 18, 1998.
Survivors include three daughters and sons-in-law: Judy and Mike Cunningham of Elizabethtown, Mary and Wyatt Gragg, and Phyllis and Jeff Sauer all of Louisville; a son and daughter-in-law: Danny and Dana Milby of Campbellsville; eight grandchildren: Lesley Raymer of Louisville, Shae Simpson of Indiana, Christopher Gragg of Wisconsin, Brandon Sauer, Kelsey Sauer, Jenna Sauer all of Louisville, Shawn Milby of Greensburg, and Corey Gragg of Georgia; 14 great-grandchildren; and a host of other relatives and friends.
Mrs. Milby was also preceded in death by four sisters and a brother: Clara Voyles, Ophia Clark, Odell Whitlow, Mary Lou Sidebottom, and John Pepper, Jr.
.....................................
The funeral services for Mrs. Gladys Pepper Milby will be conducted at 12:00 Noon, Central Time, Thursday, December 27, 2018 at the Cowherd and Parrott Funeral Home with burial to follow in the Green County Memory Gardens. Bro. Freddie Thompson and Bro. Jerry Scott officiating.
Visitation is requested from 3 P.M. until 8 P.M., Central Time, Wednesday at the Cowherd and Parrott Funeral Home and after 7 A.M., Thursday until time of the funeral service.
Memorials are suggested to the Gideon Bible Fund, which can be made at the funeral home.
For online condolences log onto: www.cowherdandparrott.com or Facebook.
PALLBEARERS:
Brandon Sauer, Corey Gragg, Christopher Gragg,
Shawn Milby, Josh Simpson, Daryl Raymer