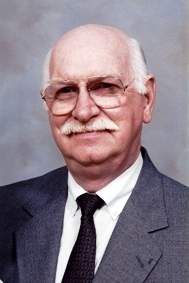 Mr. Gerald M. "Jerry" Collings of Greensburg, Kentucky, son of the late Felix Howard Collings and Christine Kerrick Collings, was born on January 22, 1934 in McClane County, Kentucky, and departed this life on Monday, February 18, 2013 at the Hardin Memorial Hospital in Elizabethtown, Kentucky. He was 79 years, and 27 days of age.

He had made a profession of faith in Christ and was a member of the Greensburg Baptist Church. He was a Pharmacist and the Owner and Operator of the Corner Drug Store for over 45 years.

Mr. Collings was also preceded in death by a son: Christopher Adam Collings on September 2, 2011; and a brother: Dr. Jack Clayton Collings.

Survivors include three sons and two daughters-in-law: Mitchell H. and Theresa Collings of Greensburg, Gregory Alan Collings of Nicholasville, and Gerald Clayton and Gretchen Collings of Beverly, Massachusetts; and a daughter-in-law: Sabrina Collings of Versailles; 10 grandchildren and their spouses: Michael B. Collings, Magel and Damon Creason, Mitchell Zebulon and Elizabeth Collings, Faun Lobb Crenshaw and Brandon Crenshaw, and Jackie and Aaron Curtsinger all of Campbellsville, Matthew Shelby Collings, Trisha and Jeremy Hall all of Greensburg, Christopher Andrew Alan Collings of Nicholasville, Michael McCaffrey of MA, and Sylvia Louise Collings of Versailles; and a host of other relatives and friends.

The funeral services for Mr. Gerald M. "Jerry" Collings will be conducted at 12 Noon, Friday, February 22, 2013 at the Greensburg Baptist Church with burial to follow in the Green County Memory Gardens. Bro. Daniel Lovell and Bro. Blake Jessie will be officiating.

Visitation is requested from 4 until 8 P.M., Thursday at the Greensburg Baptist Church and after 7 A.M., Friday until time of the funeral service. Cowherd and Parrott Funeral Home are in charge of the funeral arrangements.

Expressions of sympathy may take the form of donations to the Greensburg Baptist Church, which can be made at the funeral home.