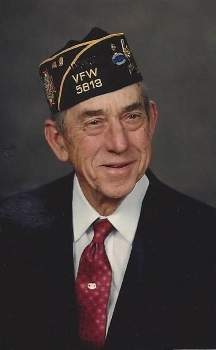 Mr. George Robert Cook of Greensburg, Kentucky, son of the late Robert Edward Cook and Ida Pinkie Walker Cook, was born on November 2, 1924 in Green County, Kentucky, and departed this life on Tuesday, January 20, 2015 at the V.A. Medical Center in Louisville, Kentucky. He was 90 years, two months, and 18 days of age.

He had made a profession of faith in Christ and was a member of the Greensburg Cumberland Presbyterian Church. He was a former Auxiliary operator for TGT, later worked for Avtec Recycling Co., and a pool room attendant. Mr. Cook was a WWII veteran having served in the United States Army. He was a life member of the James L. Pruitt V.F.W. Post #5813and past Commander. He was also a member of the American Legion Rod Lowe Post #124.

Survivors include a son and daughter-in-law: Ralph Edward Cook and Ann Hoagland Durham of Greensburg; a daughter and son-in-law: Georgia Dale and Tom Akin of Dumfries, Virginia; a companion: Joyce Mills of Greensburg; a granddaughter: Dana Michele Estes of Elizabethtown; four great-grandchildren: Amber Estes of Owensboro, Aaron Estes, Autumn Reynolds, and Jacob Kellogg all of Elizabethtown; two sisters: Mary Ann Dolly of Pennsylvania, and Hazel Graf of Louisville; and a host of other relatives and friends.

The funeral services for Mr. George Robert Cook will be conducted at 2:00 P.M., Saturday, January 24, 2015 at the Cowherd and Parrott Funeral Home with burial to follow in the Green County Memory Gardens with full military honors conducted by the Marion County Veteran's Honor Guard. Bro. Kevin Brantley and Bro. Charlie Taylor will be officiating.

Visitation is requested from 4 until 8 P.M., Friday at the Cowherd and Parrott Funeral Home and after 7 A.M., Saturday until time of the funeral service.