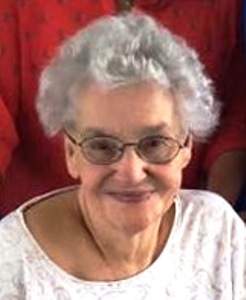 Mrs. Emma Eulean Vaughn of Green County, Kentucky, daughter of the late John Luther Walker, and Lilly Alton Berry Walker, was born on February 4, 1928 in Green County, and departed this life on Sunday, September 11, 2016 at the Grandview Nursing and Rehab Center in Campbellsville, Kentucky. She was 88 years, seven months and seven days of age.

She had made a profession of faith in Christ and was a member of the Brush Creek Baptist Church. She was also retired from the State of Kentucky Highway-Rest Area Department.

Mrs. Vaughn was also preceded in death by a brother and sister: James Lewis Walker, and Lois Hudgins.

The funeral services for Mrs. Emma Eulean Vaughn will be conducted at 10:00 A.M., Wednesday, September 14, 2016 at the Cowherd and Parrott Funeral Home with burial to follow in the Green County Memory Gardens. Bro. Dannie Nelson officiating.

Visitation is requested from 4 P.M. until 8 P.M., Tuesday at the Cowherd and Parrott Funeral Home and after 7 A.M. Wednesday until time of the funeral service.

Memorials are suggested to the Residence Council at the Grandview Nursing and Rehabilitation Center, which can be made at the funeral home.