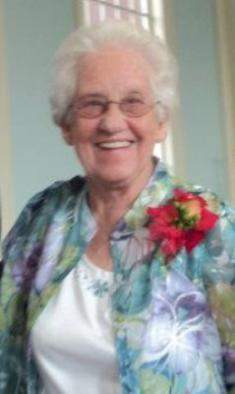 Mrs. Elsie Dobson Beams of Greensburg, Kentucky, daughter of the late Howard Leslie Dobson and Lillie Ethel Milby Dobson, was born on December 7, 1933 in Green County and departed this life on Tuesday, March 21, 2017 at the Norton Hospital in Louisville. She was 83 years, 3 months, and 14 days of age.

She had made a profession of faith in Christ and was a member of the South Summersville Baptist Church. She was a Medical Assistant 30 plus years for Dr. D. Shivakamar, Jane Todd Crawford Hospital, and former Social Services Director at Golden Living Center-Green Hill. She enjoyed sewing, quilting, farming, was a wrestling fan, talking on the phone, and was an avid University of Kentucky Wildcat fan.

Survivors include a daughter and son-in-law: Mary Lynn and Mark Chaudoin of Summersville; a son: Kenny Beams of Greensburg; grandchildren: Christa and Travis Lowery of Tennessee, William Chaudoin of Richmond, Howard Beams of Greensburg, Brandon and Ashley McKibben of Summersville, Samantha and Ryan Harper of Elizabethtown; great-grandchildren: Colton, Sierra, and Jaylee Beams, Audree, Mason and Tanner McKibben, Kaden and Kodie Price; a step-great-grandchild: Wesley Harper; brother-in-law and sisters-in-law: Bro. Charlie Warren, Ethel Rattliff, and Louise Dobson all of Summersville; and a host of other relatives and friends.

The funeral services for Mrs. Elsie Dobson Beams will be conducted at 12:00 Noon, Cst., Friday, March 24, 2017 at the Cowherd and Parrott Funeral Home with burial to follow in the Green County Memory Gardens. Bro. Ivan Jones and Bro. Dwayne Dobson officiating.

Visitation is requested from 4 P.M. until 8 P.M., Thursday at the Cowherd and Parrott Funeral Home and after 7 A.M., Friday until time of the funeral service.

Memorials are suggested to the Gideon Bible Fund or the Alzheimer's Association, which can be made at the funeral home.