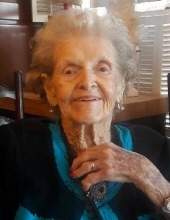 Duval Sidebottom Hay
Mrs. Duval Lorena Sidebottom Hay of Greensburg, Kentucky, daughter of the late Loy Sidebottom and Maudie Jones Sidebottom, was born on Thursday, July 26, 1923 in Green County, Kentucky and departed this life on Thursday, March 29, 2018 at the U.K. Medical Center in Lexington. She was 94 years, 8 months, and 3 days of age.
She had made a profession of faith in Christ and was a longtime member of the Summersville Baptist Church. She was a retired teacher for the Green County Board of Education having taught for 36 years. Mrs. Hay was also a member of the American Legion Ladies Auxiliary and the longest member of the Green County Homemakers Club.
She united in marriage to Philip Hay on June 8, 1946 who preceded her in death on April 10, 1988.
Survivors include a son and daughter-in-law: Philip and Mitzi Hay of Campbellsville; a daughter: Erna Hay of Lexington; two brothers: David Sidebottom and Jimmy Sidebottom both of Green County; a special friend: Adriana Duque of Lexington; and a host of other relatives and friends.
Mrs. Hay was also preceded in death by a grandson: Philip Marshall Hay on February 6, 2004; a sister and three brothers: Betsy Shuffett, Loy J. Sidebottom, Darwin Sidebottom and Harold Sidebottom.
...................................................
The funeral services for Mrs. Duval Lorena Sidebottom Hay will be conducted at 11:00 A.M., Central Time, Tuesday, April 3, 2018 at the Cowherd and Parrott Funeral Home with burial to follow in the Green County Memory Gardens in Summersville, Kentucky. Dr. Robert Golden, Bro. Daniel Marcum, and Bro. Chuck Pollard officiating.
Visitation is requested from 5 P.M. until 8 P.M., Central Time, Monday at the Cowherd and Parrott Funeral Home and after 7 A.M., Tuesday until time of the funeral service.
Memorials are suggested to the Summersville Baptist Church or the Gideon Bible Fund, which can be made at the funeral home.
For online condolences log onto: www.cowherdandparrott.com or Facebook.
PALLBEARERS:
Don Sidebottom, Stacy Sidebottom, Larkin Sidebottom, Jonah Sidebottom,
David Lewis Sidebottom, Tim Shuffett, James David Shuffett, Bill Shuffett,
Doug Sidebottom, Ed Rogers.