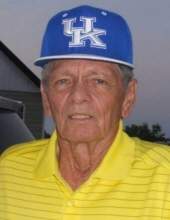 O B I T U A R Y
Donnie Reynolds
Mr. Donald Elwood "Donnie" Reynolds of Summersville, Kentucky, son of the late Elmer Reynolds and Emma Higgason Reynolds, was born on Monday, November 14, 1938 in Green County, Kentucky and departed this life on Wednesday, May 1, 2019 at the Taylor Regional Hospital. He was 80 years, 5 months, and 17 days of age.
He had made a profession of faith in Christ, was a member of the Aetna Grove Baptist Church, and attended the Oak Forest Cumberland Presbyterian Church. He was retired from Civil Service with Fort Knox. He was a Veteran having served in the United States Army, was a member of the Rod Lowe American Legion Post #124, and the Disabled American Veterans.
Survived by his wife of 34 years, Rita Henderson Reynolds of Summersville, having united in marriage on May 4, 1985.
Other survivors include two daughters and sons-in-law: Darlene and Jack Henderson, Lana and Danny Bush all of Greensburg; a son and daughter-in-law: Timmy and Beverley Day of Greensburg; eight grandchildren: Casey and Chris Lay of Summersville, Emillee and Jonathan Whitlow of Greensburg, Corey and Michael Samples of Lexington, Becca Bush of Greensburg, Blake and Laura Day of Campbellsville, Colton Bush, Macy Thompson, and Devin Day all of Greensburg; two great-grandchildren: Maxton Whitlow and Ellie Whitlow; a sister-in-law: Lillian Reynolds of Hodgenville; and a host of other relatives and friends.
Mr. Reynolds was also preceded in death by a grandchild: Carly Henderson; a sister: Joyce Vance; and two brothers: Arnold Reynolds and Manford Reynolds.
.................................................
The funeral services for Mr. Donnie Reynolds will be conducted at 11:00 A.M., Central Time, Friday, May 3, 2019 at the Cowherd and Parrott Funeral Home with burial to follow in the Green County Memory Gardens. Bro. Joe Milby and Bro. Robert Knight officiating.
Visitation is requested from 4 P.M. until 8 P.M., Central Time, Thursday at the Cowherd and Parrott Funeral Home and after 7 A.M., Friday until time of the funeral service.
Memorials are suggested to the Gideon Bible Fund, which can be made at the funeral home.
For online condolences log onto: www.cowherdandparrott.com or Facebook.
PALLBEARERS:
John Henderson, James Henderson, Colton Bush, Blake Day,
Devin Day, Mike Goff, Tim Larimore, Jay Shofner
HONORARY PALLBEARERS:
Everett McCubbins, William Lewis Warren
Gene Vaughn, Cotton Bardin