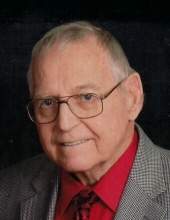 Mr. Dean Frank Schultz of Campbellsville, Kentucky, formerly of Wisconsin, son of the late Frank J. Schultz and Emma Schienke Schultz, was born on September 15, 1938 and departed this life on May 7, 2019 at the Campbellsville Nursing and Rehabilitation Center in Campbellsville, Kentucky. He was 80 years, 7 months, and 22 days of age.
He had made a profession of faith in Christ and was a member of the Greensburg United Methodist Church. He was a retired carpenter and grounds keeper for the Salem Central High School in Paddok Lake, Wisconsin.
Survived by his wife of 58 years, Shirley I. Rasch Schultz, having united in marriage on November 26, 1960.
Other survivors include a daughter and son-in-law: Amanda and Charles Crane of Lebanon; a son and a daughter-in-law: Dwight and Tiffany Schultz of Salem, Wisconsin; three grandchildren: Jeremy Crane, Dustin Crane and Casey Crane; one great-grandchild: Konner Crane; one sister and a brother-in-law: Darlene and Harry Zurawski of Michigan; one brother and a sister-in-law: Wayne and Helen Schultz of Wisconsin; four sisters-in-law and three brothers-in-law: Doris and Glen Carnahan of Twin Lakes, Wisconsin, Glenn and Nancy Rasch of Sandy, Utah, Jim and Linda Rasch of Verona, Wisconsin, and June Rasch of Twin Lakes, Wisconsin, and a host of other relatives and friends.
Mr. Schultz was also preceded in death by three sisters: Jayne Schultz, Caroline Debell and Clairella Rupert.
.........................................
The funeral services for Mr. Dean Frank Schultz will be conducted at 11:00 A.M., Central Time, Saturday, May 11, 2019 at the Greensburg United Methodist Church with burial to follow in Green County Memory Gardens. Bro. Dale Curry will be officiating.
Visitation is requested from 4 P.M. until 7 P.M., Central Time, Friday at the Cowherd & Parrott Funeral home, from 7 A.M. until 8A.M. Saturday at the funeral home and after 9 A.M., Saturday at the Greensburg United Methodist Church until time of the funeral service.

Memorials are suggested to the Greensburg United Methodist Church Building Fund and the Hosparus of Green River, which can be made at the funeral home.