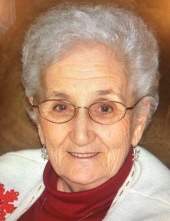 Mrs. Cleo Hall Judd of Greensburg, Kentucky, daughter of the late Walter L. Hall and Elsie J. Judd Hall, was born on Thursday, June 2, 1921 in Green County and departed this life on Tuesday, December 15, 2020 at the Summit Manor Nursing & Rehab Center in Columbia, Kentucky. She was 99 years, 6 months, and 13 days of age.
She had made a profession of faith in Christ, was a member of the Pleasant Ridge Baptist Church where she was church clerk for 37 years, and Sunday school teacher for 40 plus years. She was retired from Fruit of the Loom, Inc., and was a seamstress, and a homemaker.
She united in marriage to Veachel Judd on February 24, 1940 who preceded her in death on March 29, 2000.
Survivors include three sons and two daughters-in-law: Wesley and Betty Judd, Donald Wayne Judd, and Gordon and Sue Judd all of Greensburg; a daughter and son-in-law: Thelma and Wayne Hatcher of Columbia; two sisters-in-law: Marcella Hall of Louisville, Addlene Judd of Glasgow, and a brother-in-law: Curtis Judd of Campbellsville; eight grandchildren; and a host of great-grandchildren; great-great-grandchildren, step-greats, and step-great-great-grandchildren; other relatives and friends.
Mrs. Judd was also preceded in death by a daughter-in-law: Brenda Judd; a sister and three brothers: Allene Pierce, Paul Hall, Walter Clell Hall, and Charlie Taylor Hall; a grandson: Mark A. Judd; two great-grandchildren: Mikayla Elizabeth Scott and Cally Paige McFall.
……………………………………….
There will be graveside services held for Mrs. Cleo Hall Judd at 1:00 P.M., Central Time, Friday, December 18, 2020 at the Green County Memory Gardens in Summersville.
There will be a walk-through only visitation held from 11:30 A.M. until 12:30 P.M., Central Time at the Cowherd and Parrott Funeral Home Friday.
The family has asked that expressions of sympathy take the form of donations to Joy Ministries/Cally’s House, which can be made at the funeral home.
For online condolences log onto: www.cowherdandparrott.com or Facebook.
Due to Covid-19, please continue to practice social distancing, and facial covering is required.
PALLBEARERS:
Vernon White, Glen Judd, David S. Judd,
Don Judd, Jr., Brian Scott, Austin Judd
HONORARY PALLBEARERS:
Pleasant Ridge Baptist Church Sunday School Class