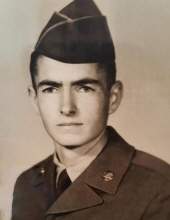 O B I T U A R Y
Mr. Billy Ray Bale of Summersville, Kentucky, son of the late Garnett Edwin Bale and Bessie Ford Bale, was born on Thursday, January 18, 1934 in Green County, Kentucky and departed this life early Friday, December 1, 2017 at the University of Louisville Hospital. He was 83 years, 10 months, and 13 days of age.
He had made a profession of faith in Christ and was a member of the Summersville Baptist Church. Mr. Bale was a retired line worker for General Electric after 33 years of employment. He was a Veteran of the Korean War having served in the United States Army, a member of the American Legion Rod Lowe Post #124, and a member of the William B. Allen Masonic Lodge #704 F&AM in Summersville.
Survived by a son and daughter-in-law: Tracy and Pam Bale of Summersville; five grandchildren: Shelbi Bale, Grace Bale, Gage Bale all of Summersville, Natalia Warren and her husband, Andy of Campbellsville, and Kelsey Gowin of Richmond; three great-grandchildren: Tyler Phillips of Summersville, Ryland Warren and Kase Warren both of Campbellsville; a brother: Charles Bale of Magnolia; a special friend: Rita Slude of Greensburg; and a host of nieces, nephews, other relatives and friends.
Mr. Bale was also preceded in death by a son: Marty Ray Bale; and two brothers: Hulet Bale and Eugene Bale.
.................................................
The funeral services for Mr. Billy Ray Bale will be conducted at 12:00 Noon, Cst., Monday, December 4, 2017 at the Cowherd and Parrott Funeral Home with burial to follow in the Green County Memory Gardens with full military honors. Bro. Daniel Marcum officiating.
Visitation is requested from 3 P.M. until 8 P.M., Cst., Sunday at the Cowherd and Parrott Funeral Home and after 7 A.M., Monday until time of the funeral service.
A Masonic Service will be held at 6:00 P.M., Sunday, at the Cowherd and Parrott Funeral Home conducted by the William B. Allen Masonic Lodge #704 F&AM.
Memorials are suggested to the Summersville Baptist Church Youth Program, which can be made at the funeral home.
For online condolences log onto: www.cowherdandparrott.com or Facebook.
PALLBEARERS:
Jerry Bale, Clint Bale, Andy Warren, Joey Bush,
Gage Bale, Steve Caven, Morris Whitlow