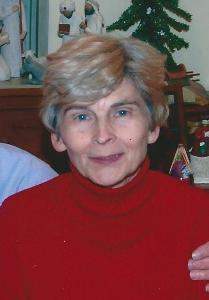 Mrs. Betty D. Lewis of Summersville, Kentucky, daughter of the late Floyd Riddle and Dora Dean Craft Riddle, was born on December 8, 1935 in Clinton County, Kentucky, and departed this life on Wednesday, June 26, 2013 at the Jane Todd Crawford Hospital in Greensburg. She was 77 years, six months, and 18 days of age.

She had made a profession of faith in Christ and attended the Greensburg Church of the Nazarene. She was a homemaker and Store Clerk.

She is survived by her husband of 59 years, Leon Lewis having united in marriage on June 16, 1954.

Other survivors include two sons and daughters-in-law: Leon Jr. and Ann Lewis of Columbia, and Steve and Tracy Lewis of Summersville; a daughter and son-in-law: Sonya and Johnny Orberson of Campbellsville; five grandchildren: Chris Lewis and LeAnna Lewis both of Columbia, Ann-Michael Tucker and her husband Jordan of Greensburg, Becca Orberson, and John Lewis Orberson both of Campbellsville; a sister and brother-in-law: Janice Purcell-Basu and Joy Basu of Louisville; a brother and sister-in-law: Billy and Linda Riddle of Somerset; and a host of other relatives and friends.

The funeral services for Mrs. Betty D. Lewis will be conducted at 10:00 A.M., Friday, June 28, 2013 at the Greensburg Church of the Nazarene with burial to follow in the Green County Memory Gardens in Summersville. Bro. Jared Henry and Bro. Richard Morgan will be officiating. Cowherd and Parrott Funeral Home are in charge of the funeral arrangements

Visitation is requested from 4 until 8 P.M., Thursday at the Greensburg Church of the Nazarene and after 7 A.M., Friday until time of the funeral service.