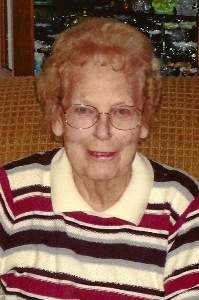 Mrs. Annie Lucille Creason Durrett of Summersville, Kentucky, daughter of the late Elam Creason and Cynthia Estes Creason McCubbin, was born on May 22, 1923 in Green County, Kentucky and departed this life on Tuesday, August 21, 2012 at the Jane Todd Crawford Hospital. She was 89 years, two months, and 30 days of age.

She had made a profession of faith in Christ and was a member of the Brush Creek Baptist Church. She was a retired seamstress for the American Needlecraft Company, and a homemaker.

The funeral services for Mrs. Annie Lucille Creason Durrett will be conducted at 10:00 A.M., Friday, August 24, 2012 at the Cowherd and Parrott Funeral Home with burial to follow in the Green County Memory Gardens. Bro. Leslie Jewell will be officiating.

Visitation is requested from 3:30 until 8 P.M., Thursday at the Cowherd and Parrott Funeral Home and after 7 A.M., Friday until time of the funeral service.